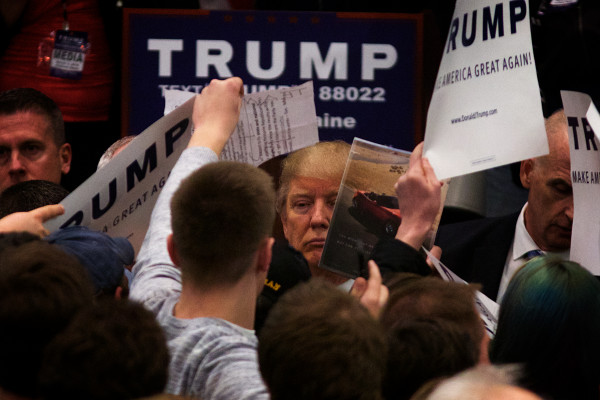 The phenomenon that is Republican presidential front-runner Donald Trump came to Portland to rally with Gov. Paul LePage on Thursday and the headlines centered around his attacks on 2012 nominee Mitt Romney.

That’s because it was Trump’s first public event after Romney criticized him in a speech earlier in the day, but there were moments from Trump’s 45-minute, stream-of-consciousness speech, conversations with Trump supporters and other observations that ended up not making my story.

Here are some of them:

Trump torched Romney at length, including in an anecdote about a carpet in his Trump Tower apartment being ruined because he held a fundraiser for Romney on a rainy day. “Nobody thanked me for the carpet,” he said. “Hey, maybe I can send Mitt a bill for ‘carpet ruined.’ ”

The WGC-Cadillac Championship is being played at Trump’s golf course in Miami this week, and Trump let the crowd know he could totally have been there on Thursday, name-dropping stars Rory McIlroy and Tiger Woods.

“They’re all there. They’re all at my place and here I am making a speech in Maine,” he said. “So if I don’t win on Saturday, I’ll say, ‘Boy, was that a mistake,’ right?”

This is something Trump often tells his supporters. The ballroom in the Westin only has a capacity in the hundreds and there was an overflow room and there were people who couldn’t get in, but the throngs weren’t like that.

LePage made what sounded like a straight-faced joke that “Democrats will vote next Sunday. Don’t tell them this week.”

Democrats will actually caucus this Sunday, and his remark upset some Democrats who said he was trying to mislead voters.

That was even though six days before LePage’s endorsement of Trump, the governor was reportedly urging his colleagues to denounce Trump.

“I love tough people. You need tough people and he’s a tough cookie,” Trump said. “And when we got his endorsement, we were thrilled, I will tell you that. He is a great guy.”

I don’t even blame Trump for this one — because Maine’s tourism site says the state is larger than all other New England states.

But once you do the addition, the 35,385-square-mile is slightly smaller than the other five New England states, which have 36,282 square miles between them. So, he’s almost right.

But Trump also called Maine “one of the most beautiful places on Earth” and in Trump fashion, mused about buying some land.

As Trump supporters lined up to get into The Westin Portland Harborview hotel for the rally, an anti-Trump protest was going on in Congress Square Park.

This led to some colorful barks from Trump supporters, most notably one man who shouted at a female speaker, “You’re not politically correct unless you dump ’em out.”

Protesters were removed from the room on four occasions. He also used one opportunity to praise Portland police — then police across the country. Each time, police would move toward protesters and Trump would order their removal to the crowd’s delight.

“Get him out, please. Get him out,” he said when the first one was ejected. “What are they doing, right? What’s the purpose? Well, maybe he gets a little television time.”

Some of Trump’s support had racial tones: One man waiting in line for the event said illegal immigrants must be “packed up and shipped back to where they came from” — as Trump has proposed — and supporters in line outside the event cheered a Confederate flag in the back of a truck that passed by.

But when you ask many about Trump, the first things they mention aren’t his policies: Rather, it’s that establishment figures in both parties have let them down and Trump promises to shake up the system.

Jacob Gurney, a 27-year-old Portland native who now lives in Hawaii and wore an “Make America Great Again” hat as he waited, said he’s identified as a Republican all his life.

But he said Trump’s “not your typical Republican” — “he’s Trump; he’s the man” — and he’d shake up American politics, even though he doesn’t agree with everything Trump says.

“He says exactly what he thinks, exactly what he means. Not everybody’s going to agree with it and that’s fine,” Gurney said. “We need a change and we need someone who’s not a yes man.”