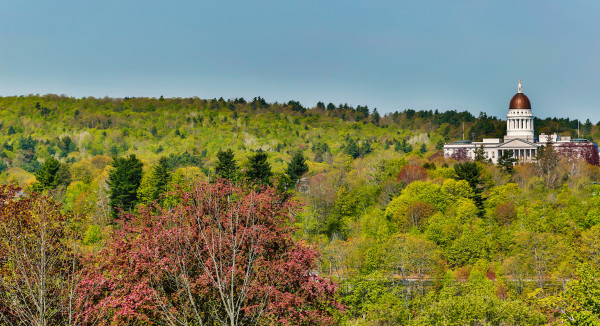 Howard Hill, the backdrop to the State House in Augusta, will be conserved in a project under the Land for Maine’s Future program. (Photo courtesy of the Kennebec Land Trust)

Gov. Paul LePage on Tuesday nominated a former lawmaker who lost re-election in 2016 after heavy local criticism on conservation issues to serve on the board of the Land for Maine’s Future program.

Former state Rep. Michael Timmons, R-Cumberland, is LePage’s nominee to serve on the board. It steers public funding to conservation projects and has protected more than 500,000 acres statewide, but it has been a main point of contention between the Republican governor and environmentalists.

For much of 2015, LePage held up the issuance of $11.5 million in voter-approved conservation bonds, trying to get the Maine Legislature to agree to a plan to increase timber harvesting on public land to fund energy upgrades for low-income Mainers.

He eventually reversed course and said he’d issue $5 million in bonds toward 2015’s end. In early 2016, he compromised with the Legislature to revive the remaining $6.5 million that had expired.

The issue may have claimed Timmons’ political career: He was one of six Republicans who initially voted in 2015 to support a bill cutting the governor out of his bond-issuing role, but then switched their positions to support LePage’s veto. More than $250,000 for a conservation project in Cumberland was held up then, and the town manager blasted Timmons at a 2015 meeting.

Even without that baggage, Timmons was vulnerable in the election after winning by just 16 votes in 2014 and he was defeated easily in a rematch with Democrat Dale Denno of Cumberland in November.

The Senate has to confirm the appointment. Before that, Timmons will have a hearing before the Legislature’s agriculture committee.