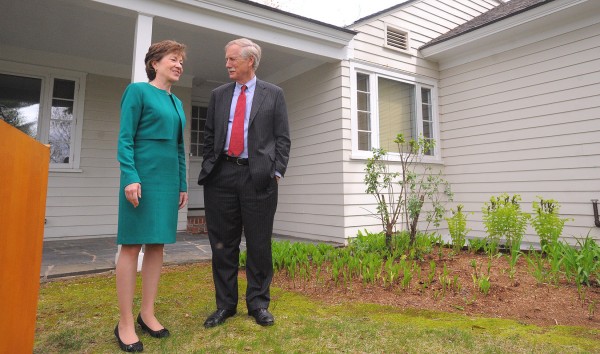 U.S. Sen. Susan Collins and U.S. Sen. Angus King, an independent, speak after a Skowhegan event where he endorsed her in 2014. (BDN file photo)

Maine’s junior senator told reporters on Friday that he has never seen a greater act of political “courage and commitment” than U.S. Sen. Susan Collins’ party-bucking vote against a plan to repeal and replace the Affordable Care Act.

The comments from independent U.S. Sen. Angus King came just hours after Collins was one of three Republicans who cast votes dooming Republicans’ pared-down plan to repeal the health care law at the end of a frantic late-night session.

It was a blow to key Republicans, namely President Donald Trump, who tweeted that the group of opposing senators — which also included Republicans Lisa Murkowski of Alaska and John McCain of Arizona — “let the American people down.”

A Collins spokeswoman didn’t respond to an interview request on Friday, but a Twitter user posted a picture of her in the Bangor airport, saying she got off her plane from Washington, D.C., to applause in the terminal.

She released a statement saying while the Affordable Care Act is flawed and in “near collapse” in some areas, it requires a bipartisan solution. Under Senate Republicans’ latest plan, 16 million would have lost coverage and premiums would have risen by 20 percent by 2026, according to a Congressional Budget Office estimate.

Collins cast the first Republican vote against the plan early Friday morning. That was after Vice President Mike Pence came to the Senate floor and “cajoled” the three Republican opponents for more than 20 minutes, according to The Washington Post.

King, who caucuses with Democrats and also opposed the Republican plan, was effusive about Collins when he talked to reporters after landing at the Portland International Jetport on Friday afternoon.

“I don’t think I’ve ever seen a public official manifest greater courage and commitment to their constituents than Susan Collins has over the last week,” he said, “and the people of Maine need to understand that.”