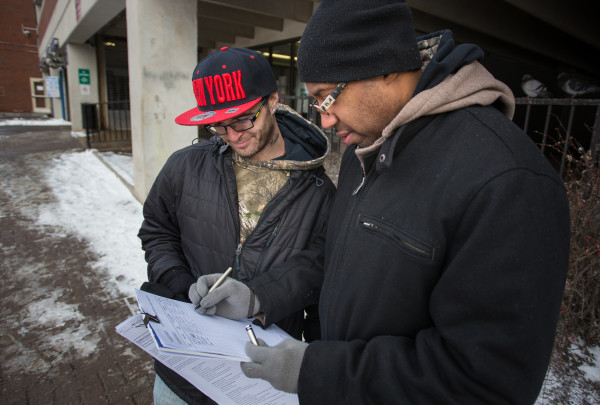 Ralph Tripp, 32, of Bangor and Maurice Gunn coordinate on a signature-gathering effort for the York County casino referendum in Bangor in 2016. (BDN file photo)

Three lawyers representing backers of the York County casino referendum on Maine’s 2018 ballot said Thursday they didn’t know in advance about a political committee with ties to China joining the race to pass their proposal.

The Maine Ethics Commission is already investigating a political committee run by Lisa Scott — the sister of U.S. Virgin Islands developer Shawn Scott — that apparently violated Maine law by at first saying $4.2 million in contributions came from her, but later saying it came from a web of domestic and offshore companies.

The ethics panel met Thursday to continue work on that probe, but the meeting was highlighted by talk around Progress For Maine, the new political action committee that registered on Monday. It was founded by a New York City company that is controlled by a Chinese consulting firm supporting the American EB-5 visa program.

Jonathan Wayne, the commission’s executive director, said he expects that Progress For Maine — which reported $330,000 in debt mostly to hire political consultants — will take over the campaign from Lisa Scott’s committee, Horseracing Jobs Fairness, although he wasn’t sure about that.

The assembled lawyers for casino backers didn’t know much, either.

“I have no information suggesting my client has anything to do with the new PAC or will be in any way involved with the new PAC,” said Bruce Merrill, an attorney for Lisa Scott, adding that he learned about Progress For Maine in the media.

Avery Day, an attorney for Augusta lobbyist Cheryl Timberlake, the treasurer of Horseracing Jobs Fairness, said he also learned about it in the media.

So, it’s unclear how the new PAC interfaces with the backers. But the proposal was submitted by Lisa Scott and the only entity that could build the casino under the question is Capital Seven LLC, a Nevada company linked to her brother.

Shawn Scott, who has many ties to offshore firms, used that company during his successful 2003 campaign that persuaded voters to allow slots at a Bangor facility. He sold the rights to it for $51 million in 2004 without a license to operate a casino in Maine after a damning regulatory report and it became Hollywood Casino.

Drew Ketterer, who was Maine’s Democratic attorney general from 1995 to 2001, was at the Thursday meeting and said afterward that he hired to represent Capital Seven on Friday.

But he said he didn’t know enough to answer whether Shawn Scott still controls the company he represents, adding that “I don’t know anything” about the new PAC.