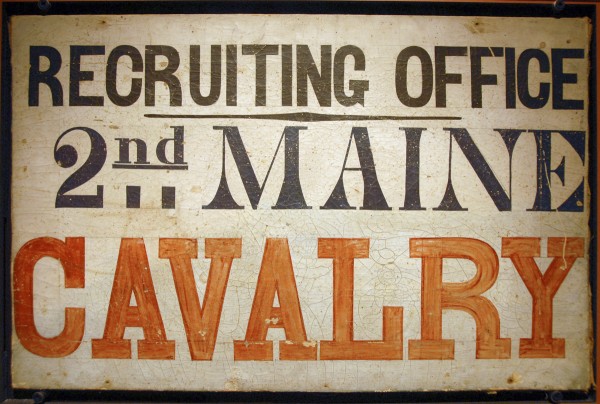 This recruiting sign, which came from a Kennebunk recruiting office for a Civil War regiment formed in 1864, was on display at the Maine State Museum in 2014. (BDN file photo)

Calling himself “a history buff,” Gov. Paul LePage revised Civil War history as we know it in a Tuesday radio interview when discussing the racially charged violence in Virginia and saying “7,600 Mainers fought for the Confederacy.”

There is just a kernel of truth: Maine State Archivist David Cheever said that approximately 30 people are confirmed to have gone from Maine to the Confederacy, including students who left Bowdoin College in Brunswick and what is now Colby College in Waterville to fight, but they could have been from other parts of the country.

Maine’s history as one of the proudest Union states is well-documented. It sent about 73,000 people to war — a higher proportion than any other state — and more than 9,000 died, though there were some pockets of Southern sympathizers.

A few men with Maine ties became Confederate generals, including the Leeds-born Danville Leadbetter, the Avon-born Zebulon York and Josiah Gorgas, who controlled the Kennebec Arsenal in Augusta from 1856 to 1858.

But those three hardly qualified as Mainers at the time they joined the rebels. Leadbetter went to the South originally as a U.S. Army officer. York joined as a Louisiana plantation owner. Gorgas was moved from Maine to other assignments before quitting the Army and going to Alabama to fight the Union.

Cheever said there’s one big reason it’s unlikely more than 7,000 left Maine to fight: There was a census of draft-eligible men to meet quotas, so if that many men were missing, it would have been “an alarming number and well-noticed” by state and federal officials.

“I’m pretty sure that the governor misspoke,” he said of LePage. “He may have thought something, but 7,600’s pretty strong.”

LePage also said on WVOM the war was “a property rights issue” when it began, saying Lincoln made it about slavery “to a great degree,” but Elizabeth Leonard, a Colby College history professor, said the governor “is wrong there, too.”

Slaves were property then and Southern states’ right to slavery was a major issue of the 1860 election, which was narrowly won by Lincoln in a crowded field. More than 62 percent of Mainers voted for him, a percentage topped by only three other states. Mainer Hannibal Hamlin was Lincoln’s first vice president.

And Alexander H. Stephens, the Confederate vice president, said in a speech about a month before the war that slavery was “the proper status of the negro in our form of civilization” that it was “a realized fact” that the issue would split the nation. It did.