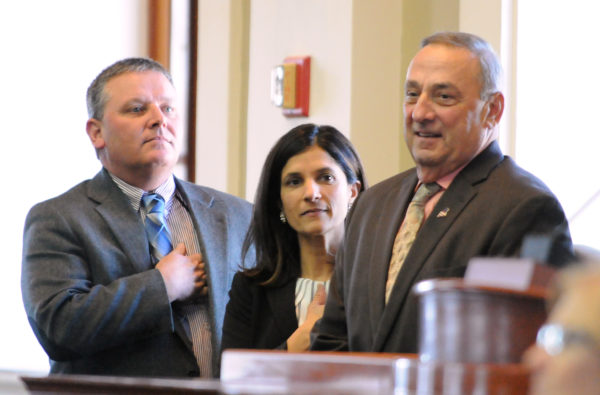 The top Republican in the Maine Legislature said Friday that he expects lawmakers to address marijuana legalization and ranked-choice voting in a special session demanded by Gov. Paul LePage that will likely be set for October’s end.

The Republican governor notified the Legislature this week that he’d call them back after the federal government deemed a first-in-the-nation food sovereignty law that passed earlier this year at odds with federal food safety laws and threatened to seize control of state meat and poultry inspections if changes aren’t made.

But lawmakers were already planning to reconvene in the fall to address two complicated citizen-initiated laws — Maine’s new legal marijuana market and a ranked-choice voting law deemed unconstitutional by the state’s high court.

Republicans and Democrats deadlocked on different solutions to Maine’s ranked-choice voting issue during a difficult session that led to the state’s first government shutdown since 1991. A bill from Rep. Kent Ackley, I-Monmouth, to bring it into constitutional compliance has been carried over to next year and could be a vehicle.

Most Republicans, led by Senate President Mike Thibodeau, R-Winterport, would like to kill the law well ahead of the June 2018 primaries. The Maine Supreme Judicial Court said the law was unconstitutional as it pertains to state general elections, but it left unaddressed whether it could go forward in primaries and federal elections.

Thibodeau said Friday that while he still wants to repeal it, “we’re open to figuring out a different path if that’s what gets people on board.”

“But we certainly can’t leave it unattended to,” he said.

Thibodeau said while he doesn’t think there is an issue, he’s awaiting more information from the administration to determine that and if one is found, he’d be open to fixing it during the special session. Casale said her boss would agree.

Legislative action will pick up over the next few weeks: A public hearing on that unfinished marijuana bill is set for Sept. 25 and the Marijuana Legalization Committee will work more on it the next day to get it ready for a special session, which Thibodeau said would likely be in late October.

Clarification: This post was updated on Sept. 6 to clarify the elections that the high court opinion on ranked-choice voting applied to.